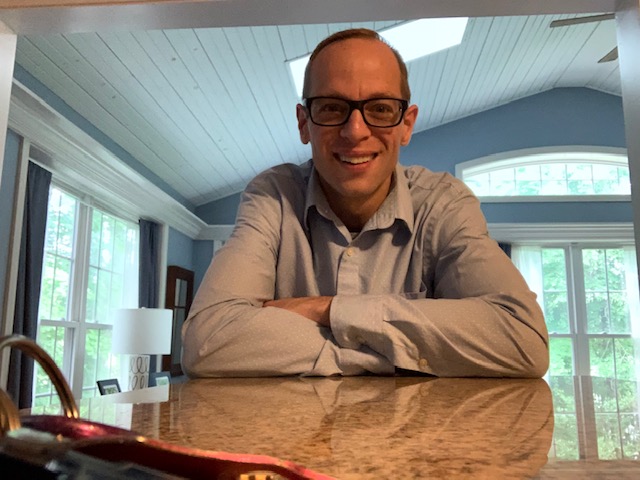 I remember the last time we had dinner together as a family. It was 1984, and although air conditioning had been invented, we didn’t have a single one in the house.  It was summertime and the heat inside the kitchen from cooking made it so the wallpaper was peeling back from the wall.  We were sitting around the table in the kitchen, and my father was shoveling spaghetti and sauce into his mouth like it was his last meal.  Outside of his usual barbaric grunts and groans, there was a deafening silence coming from the rest of us.  My brother was late again.  This wasn’t unusual, but for some reason my head was on a swivel.  My eyes kept darting toward the front door, which was to my back, in nervous anticipation.   When is he going to come home?  I remember hoping at the same time that he wouldn’t.

Finally, the front door slowly opened and David poked his head through the door.  I don’t remember anyone else eating.  My dad’s chewing became more aggressive and all our faces listened for the danger.  David skated across the kitchen floor over to the sink to wash up before taking his place at the dinner table.

“Where were you this time?” Dad asked.

My brother wouldn’t turn around.  He kept rubbing his hands together and staring into the sink, afraid to turn around.

“Why’d it take you so long for you to get home?”.  “You just got a new bike, so if anything, you should’ve been home early, not late.”

“I was over at Cisco’s house, and I left the bike outside.  When I came out to come home, it was gone.”

My father’s hands clenched into fists and he slammed them down on the table.  My milk jumped up over my cup, spilling onto my lap.  My mother gasped and my sister started to cry, but David just turned around and his head sunk into his chest like an anchor was tied to his chin.  He was constantly getting into trouble, and even though he didn’t do anything wrong, he felt at fault.  The bike was a birthday gift and with money being tight in the house, they splurged to get it for him.

“Godamn, you better get that fucking thing back!” Dad said, shooting a death stare towards my brother.

David slid to the table, somehow finding his seat through an act of repetition rather than consciousness.  We all began to eat the spaghetti and sauce.  All that could be heard was the clinking of fork to plate, milk sliding down throats, and a harrowing sound of fear swirling over the dinner table.  My mom finished first and started taking the dishes to the sink to clean up.  My dad began to fill his cup with whiskey and the fear that had at first began to swirl, now became a spiral.

“How are you going to make this right?  It seems like everything you get,  you give away or get stolen.  Don't you know how to do anything right?  Do you have to mess up everything?  How ya gonna make it right?”

“He’s only eight years old, what do you expect him to do, get a job and buy a new bike?” Mom said.

David twirled the remaining spaghetti around his fork, mimicking the tornado-esque fear in the air overhead.  My sister finished crying and slowly began eating to ease the fear.  Dad got up to replenish his serving of pasta and fill his glass and for a minute I thought about running away.

Before my dad sat down, my brother pleaded, “It wasn’t even my fault.  I didn’t steal the bike.”

“Well you sure as shit didn’t take care of it either, did you?”

“Oh, really?  If you took such good care of it, why the hell is someone else riding it right now?”

My brother didn’t reply.  Instead, he decided to take the 5th, but that response wasn't going to fly in my father’s court of law.  My sister finished eating, but couldn’t muster enough courage to get up from her chair.  My mom should’ve had the dishes cleaned by now, but she was deliberately slow-playing it so she didn’t have to bear witness to my dad's cruelties.  My dad tilted his head back and let the poison slink into his psyche slowly.  Once again, he balled up his fists and threw them onto the table.  My milk was finished, so nothing spilled out.

Dad just smiled wildly “you just can’t do anything right, can ya?”

His eyes clenched in anger and when my brother looked up he took this as a sign to escape.  He snatched his plate and silverware and darted toward the sink. My dad snapped his eyes open and picked up his spaghetti-filled plate and slung it toward the sink at my brother.  The eye of the storm was now directly over my mother and the plate crashed into her chest, spaghetti collapsing onto the linoleum kitchen floor.  My brother clung onto my mom like the remaining pasta stuck to her chest.

“Get out of this fucking house, now!” Mom said.

Now it was my father who turned into the mute, whose chin dropped to his chest, and the deafening silence of the moment weighed us down in place of gravity.  My dad lost the ability to speak, maybe realizing the power of words no longer belonged to him.  He quickly descended from judge to plaintiff, and as if knowing the outcome of his case before hearing the outcome, he rose to his bed and began to pack.

“I didn’t do anything wrong.  I just rode the bike to Cisco’s like I’m supposed to,” David said, not talking to anyone in particular.

Mom didn’t respond.  Just kept washing the dishes and left the spaghetti incident on the linoleum kitchen floor.  My sister and I looked at each other, and in our unspoken language, we spoke.  We got up and cleaned up the spaghetti and hugged our mom.

Before she could answer, you could hear the sirens wailing down the street.  David must’ve called them on the phone in our room.  My mom stopped the faucet and snapped out of the tornado.

“You called them?  Jesus, I was just about to leave,”  Dad said, reentering the kitchen with a suitcase.

As though it were dad who was the child, he picked up the suitcase, tossed it into the trunk and slid into the driver's seat.   Without looking up, he made smoke and was gone.